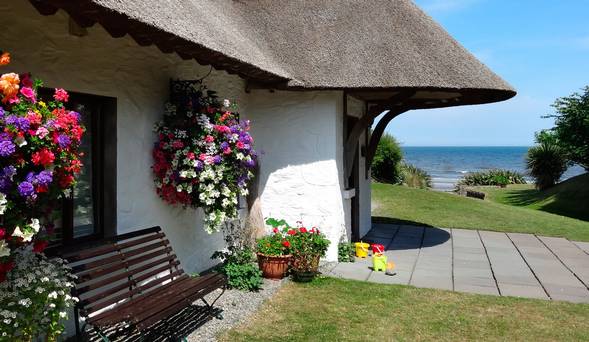 A coastal hideaway within striking distance of Dublin has been named the Best Beach Holiday Home in Europe.Thatcher’s Rest (below), one of a suite of six seaside cottages in Bettystown, Co. Meath, was a winner at the 2016 European Home Holiday Awards, held in Brussels.

Entries from over 23 countries were submitted for the awards, which are run by the European Holiday Homes Association (EHHA).

“We’re over the moon,” said Liz Pickett, who runs Cottages Ireland with her husband Roger, when contacted by Independent.ie Travel this week.

“We had zero expectation of winning. We felt like we’d won being shortlisted, to be honest. We were up against gorgeous places ranging from Cornwall to an island in Croatia, with all the bells and whistles. It is a major wow to have won.”

The Picketts’ six cottages are a mix of old-meets-new with their own private beach access, and though they may be little known to holidaymakers here in Ireland, guides like Sawday’s and Premier Cottages have confirmed their reputation abroad.

“We are very proud of the Picketts for their great achievement,” said Dorren Quinn of the Irish Self Catering Federation (ISCF), of which Cottages Ireland is a member.

“Irish self-caterers have reached the finals before, but this is the first Irish win.”

The award will be presented by Carlos Villaro Lassen, Secretary General of the European Holiday Home Association, during the ISCF Annual General Meeting and workshop day taking place on Thursday, 17th November. He will also address the attendance with an overview of the European Self-catering Industry while other speakers will seek to give guidance to members of this rapidly growing sector within the Irish Tourism business on the pursuit of excellence. The event will also be supported and attended by a number of leading service providers and suppliers to the self-catering industry.

The ISCF welcomes members and non-members alike to participate in the Workshop event. Full details can be found on:  https://iscf.ie/conferences/ or by phoning ISCF administrator Dorren Quinn at +353 47 32042.

See iscf.ie and cottages-ireland.com for more details. The full list of European Holiday Home award winners is available on holidayhomeaward.eu.